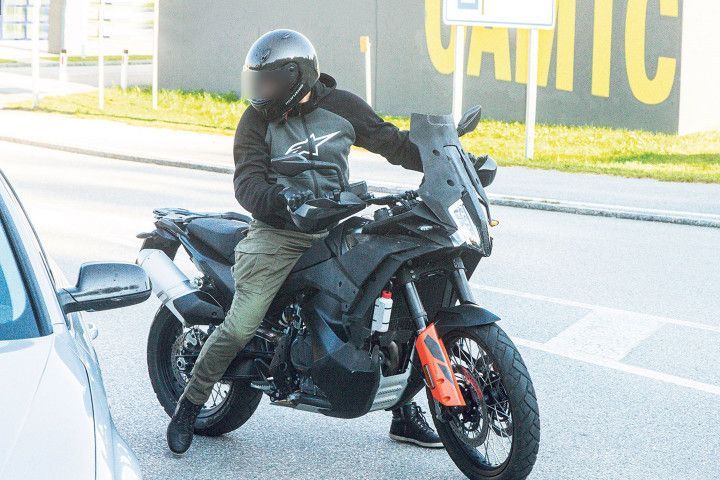 Here in India, we just got our first taste of the KTM Adventure lineup last year with the eagerly awaited KTM 390 Adventure, and then the more affordable 250 Adventure. Next up, we will be treated to the 890 Adventure, and the good news is that KTM is in the process of giving the bike a pretty major update.

Where the current model features skimpy bodywork and a slender look, the updated test mule that has been spied seems to sport a more full-fat appearance. This is largely down to the more expansive bodywork area that moves it further away from dirt-bike and closer to full-fledged ADV in terms of appearance. Like its predecessor, it seems to sport Dakar-style side-mounted fuel tanks adjacent to the engine, but the distribution has been changed. The outgoing model has tanks which are more voluminous at the bottom while the test mule seems to move more of the mass upwards. Whether this has been done to move the centre of gravity higher, or KTM will offset it by moving other less visible components lower down, only time will tell.

Going by the spy shot, the bike seems to be quite close to finished, so we expect an official unveil sometime in the middle of this year. If you’re an Indian buyer looking forward to the 890 Adventure, an official launch before the end of 2021 is quite likely. Expect a price in the range of Rs 13 lakh.

A comprehensively updated KTM 890 Adventure has been spotted testing overseas with updated bodywork and revised fuel tanks. It is likely that there could be a considerable change in weight distribution on this updated model. An official global unveil is expected in mid-2021 before an India launch by the end of the year. More details are available

Newspaper is your news, entertainment, music & fashion website. We provide you with the latest news and videos straight from the entertainment industry.
Contact us: contact@yoursite.com

10 Best Car Deals of the Month in January